START OF A PROJECT - TRAVEL AROUND POLAND, SUMMER 2019

The Fabulous Poland Project was inaugurated with a trip around Poland - a heart-shaped route, because I privately call this trip "I love you, Poland". It was a beautiful culmination of my 12-year adventure with traveling around the country, the last great journey around Poland before going abroad, and also a general rehearsal before the adventure of a lifetime - a trip around Europe. 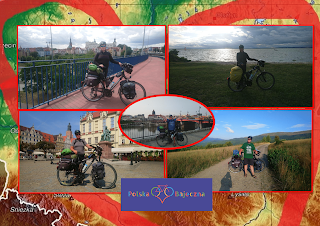 During the expedition there were 26 meetings for children in Libraries in various regions of Poland (cities, towns and villages), in which over 500 people took part, including children, teenagers and adults. Each such meeting consisted of five segments:

I. Introduction, a few words about me and my travel experiences, and above all an attempt to find the answer to the question: where exactly is Fabulous Poland.

II. Emphasis on local patriotism, i.e. do we really know what is interesting in our immediate area - in this part the participants of the meeting in Bydgoszcz and in Łęczna near Lublin showed great, but kids were also sensational in many other places.


III. A great test of knowledge of Polish legends and folk tales - in which the participants of meetings from Miłki in Masuria, Lublin and Gorlice in Lesser Poland proved to be the best. The latter approached the challenge most sportily and did not give up until they beat the result of their predecessors.

IV. Seven habits that are worth shaping to make it really fabulous in Poland in all respects, including talks about the risks associated with it.

V. A fabulous photo session, which is time for pure madness and unleashing the imagination at the end of each meeting.

During this trip I received a lot of good from people I met on my way, including first and foremost from the Librarians of Polish Libraries, both small and large, so now I would like to thank you once again for everything.

I will always have a fondness for places and people I met during this great journey (although not the first at all). It was just a foretaste of an even bigger adventure that awaits me in other countries of Europe and the world. However, I will never forget about the hospitality and kindness I have experienced in my fabulous Poland.